My dear friend and mentor Rex Trailer has passed away 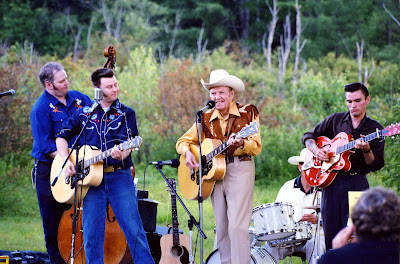 I am filled with sadness today to learn that my dear friend Rex Trailer has passed on. To me, Rex was a teacher, a collaborator, a role model, a music mentor, and a true friend. For those of you who didn’t know Rex personally, I’ll share with you a few tidbits and memories.

Rex Trailer (yup, that there is his real name) was born in West Texas. He got into the rodeo business briefly, just long enough to learn some incredible ropin’ and ridin’ tricks (see: http://goo.gl/tW0kh), but was convinced by his mentor Gabby Hayes to pursue a career in children’s television. In Philadelphia during the early 1950s he hosted a western themed TV program called Rex Trailer’s Ranch House and often shared the local stages with a young pre-Comets Bill Haley. In 1956 Rex recorded four sides for ABC-Paramount under the direction of Sid Feller, Ray Charles’ longtime collaborator and musical arranger. The most well-known of these tracks was “Hoofbeats,” which became background music during a regular segment on Rex’s new Boston-based TV series Boomtown. To sum up a very important part of his life in a few words, Boomtown aired from 1956-1974, reaching millions of homes across New England, and Rex Trailer became a New England icon. He became a hero to millions of children, specifically to families dealing with mental retardation and muscular dystrophy (as he worked tirelessly to raise money and awareness about these disabilities), to countless sheltered animals throughout Massachusetts, to aspiring actors and cowboys/cowgirls, and to so many more. He was well-known because he was on television, but he was universally loved because he was a sincere, kind, and generous person. And because he could seemingly do it all. He could fly airplanes and helicopters (he flew one of the helicopters during the filming of Steven Spielberg’s JAWS), he could act (if Boomtown wasn’t enough proof, watch him with Winona Ryder in Mermaids), he was a professional cowboy (and his horse Goldrush was always by his side), he was a fantastic musician and vocalist (as evidenced by his admittance into the Massachusetts Country Music Hall of Fame in 2000), he was a trained hypnotist and, quite honestly, the list goes on and on. What caught my attention in 1999, however, was that Rex Trailer was also a teacher at Emerson College.

I met Rex at a bar called the Sugar Shack during Rick Walkers’ (a western clothing outfitter in Boston, where I was then employed) festive Christmas party and Rex was on stage singing some of his catchy original tunes such as “It’s Your Dog,” “Cheer Up Your Corner of the World,” and “Lovin’ You Is Like a Rodeo.” At the time I was a student at Emerson College majoring in poetry and song. After the show, I asked Rex if he would be interested in becoming my songwriting advisor. To my surprise, he said ‘Sure.’ To both of our surprise, the Emerson College powers that be gave us the green light.

My thesis was on country music songwriting and Rex and I met twice a week. We studied various styles of country music songwriting and the goal was to write and record ten original songs. I remember meeting Rex in his office for the first time and wondering what we could both possibly have in common as a jumping off point. During a lull in the conversation I reached into my book pack for snack and pulled out a roll of Necco wafers. To my surprise, Rex also had his own roll with him. We bonded over our mutual love for the chalky confections (specifically the chocolate ones) and that moment sparked one of the deepest friendships I’ve come to know. Rex and I worked together on finishing those ten songs and he even sang two of them with me (see: http://goo.gl/HMV1B). We called fellow Massachusetts Country Music Hall of Famer Kenny Roberts (Rest In Peace Kenny!) and got him to join us in the studio as well! Rex inspired me to put my first band together and truly gave me my start in the Boston music scene. He invited me to join him at the award ceremony when he was inducted into the Hall and spent much of his moment in the sun introducing me to others as “The next big thing.” The following year he even nominated my record for Best New Country Music Album. During the past 14 years I’ve had the pleasure of sharing the stage with Rex and backing him up at many shows and while everybody who came to these shows came to see Rex, he spent so much of his time and energy building me up. In short, like so many people before and after me, Rex took me under his wing and did everything he could to help me succeed (He even handed me the reins of Goldrush and took a picture of us that I used for the cover of my All the Way Home album). Beyond simply professional aspirations, Rex took a sincere interest in me as a person and I greatly value our many talks about life, dogs, horses, country music, personal relationships, Necco wafers, marionettes, and everything else that came up. I can never say enough positive things about Rex and the advice he gave to me and so many others. I know there are many of his students who have gone on to great fame (see: Jay Leno, Steven Wright, Maria Menounos, and a long list of others), but the true number of students and people he helped in his lifetime is uncountable.

Rex, I’m going to miss you! I had a blast performing with you all these years. You instilled within me a lifelong passion for country music. As a recommender during my graduate school application process, you also greatly contributed to my current career path in ethnomusicology. You made my life brighter and I hope I was able to do the same for you. You have left behind a wonderful legacy. Your family, friends, and fans were brought together by your youthful exuberance and we were continually inspired by your actions and positive energy. I’m mighty glad we were able to cross paths here on this Earth and though I know you already know it, “I [Still] Appreciate You."

Your Pal Out On the Trails,

I can't really listen to this right now, but if you'd like to hear a beautiful Rex Trailer tune, here's the flipside of "Hoofbeats," called "Cowboys Don't Cry" (ABC-Paramount 9662, 1956): http://www.youtube.com/watch?v=-AvoBuS97Mc&feature=youtu.be

Posted by nathandgibson at 1:35 PM