Tomorrow morning I'll be back on the radio hosting Back to the Country on WORT 89.9 FM from 9:00-noon CST (and streaming at wortfm.org). What's the theme this week, you ask?

Well, for several months now my co-host Bill C. Malone has asked me to do a show where I play my very favorite records. "Well," I thought, "that's what I do every single month." But I think Bill was hoping to hear a more personal perspective on why I love the records that I love, so tomorrow I'll tell the story of how I came to love country music--specifically, by living in Boston, MA in the 90s50s.
For three hours I'll play my favorite Boston 90s50s records by the Racketeers, the Raging Teens, Lenny & the Piss Poor Boys, the Spurs, King Memphis, the Country Bumpkins, Jonathan Richman, and many more; Unreleased demos by the Two Timin' Three, the Bombastics, the Coachmen, Blood Sweat & Gears, and more; I'll regale you with tales of punk, ska, surf, garage, rockabilly, and honky-tonk bands intertwining; and I'll even share some of my embarrassing 1997 interview snippets with Link Wray, Los Straitjackets, and the Racketeers. 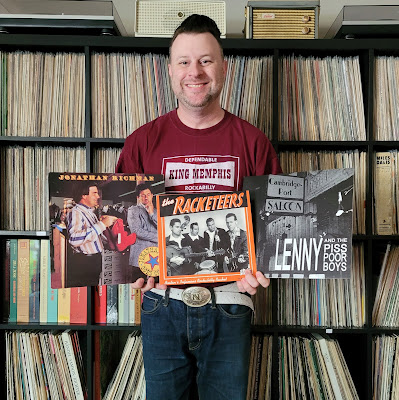 These were the tunes and bands that shaped my love for American roots music, that kept me dancing throughout my teens and beyond, and that inspired me to take up music making myself. To quote Peter Guralnick in Lost Highway, discovering the 90s50s in Boston was like "finding the bluebird of happiness on my back door" (though he found his "bluebird of happiness" by discovering Sleepy LaBeef outside of Boston in the 1970s) and I'm excited to share my path of musical discovery with you!
And for anyone in the Madison, WI area, I hope you'll come out to the Memorial Union Terrace on Thursday evening (7-9:00pm) for a free, outdoor show where and the Honky-Tonk Hodags can play some of these songs for you in person!
Posted by nathandgibson at 1:12 PM No comments:

Internationally-renowned honky-tonk musician and country music scholar Nate Gibson will be performing at the Memorial Union Terrace on Thursday August 12th from 7-9:00pm.
Gibson’s book, The Starday Story: The House That Country Music Built, won the 2012 Belmont Book Award for Best Book on Country Music and his recordings have been released on Bear Family Records (Germany), Swelltune Records, Goofin’ Records (Finland), and Cow Island Music. Gibson’s latest release, Nate Gibson & the Stars of Starday, features him duetting with 14 country music stars since the 1950s and ‘60s—accompanied by Country Music Hall of Famer Marty Stuart and members of his Fabulous Superlatives band—and was selected by Country Music People magazine as one of the “Top 10 Country Music Albums of 2019.”
Gibson is also a folklorist, ethnomusicologist, and archivist at UW–Madison and co-hosts WORT’s Back to the Country Wednesday morning radio program. He will be joined on stage by the Honky-Tonk Hodags, Wisconsin’s most beloved and fearsome purveyors of rockin’ roots and country music. 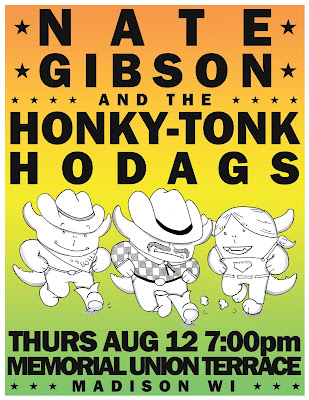 Event sponsored by WUD Music

Posted by nathandgibson at 2:11 PM No comments: