A couple years back I recorded one of my all-time favorite songs, "Royal Flush," with Wheeling Jamboree legend and Starday artist Darnell Miller, who had originally recorded it for Starday in 1958. I had a blast recreating Darnell's masterpiece alongside
Kenny Vaughan, Chris Scruggs, David Roe, John McTigue III, and Darnell and I hope that energy comes across in our recording. I've been on a bit of a hiatus with Stars of Starday video releases as other projects have jostled their way in and out of the priority queue, but I'm excited today to release our "Royal Flush" Stars of Starday marionette video.

I owe many thanks to the aforementioned musicians, as well as to David Tatge and Amandalynn Jones for their puppeteering help, to Rachel Tatge for her videography assistance, to Mike Lee for video editing, to Ken Vogel for his amazing marionettes, to Drew Carroll for lending his audio engineering talents, to Nico and Bear Family Records for releasing and distributing the CD, and of course, my MANY thanks to Darnell and Suzie for driving to Nashville and being part of the Nate Gibson & the Stars of Starday project. This was a ton of fun.
And in case you still don't own your own copy of Nate Gibson & the Stars of Starday, you can still buy copies of the Bear Family CD (w/ 56-page booklet), deluxe edition double LP, or cassette directly from me (via Ebay, Discogs, or via Facebook PM) or if you are in Europe, you can buy them directly from Bear Family Records. And if you are anything like Darnell at playing poker ("Loving you Baby, is just like a game of poker; You have all the aces, I always draw joker..."), you just might need a new Nate Gibson & the Stars of Starday-themed playing deck and set of poker chips. I've got a very small handful of poker chip sets (16 chips) and 2-sided playing cards available to celebrate our release of "Royal Flush." Playing card decks are $20, poker chip sets are $15, or you can have both for $30 (+$6 shipping).

And without any further ado, here's our little ol' video (just click and follow the link):
https://youtu.be/rLcrzi0MPQ0
Thanks so much for watching!

Posted by nathandgibson at 3:49 PM No comments:

Well, I sent out a flurry of Facebook posts, tweets, instagram DMs, snapchats, tiktok videos, and the like, but am now realizing, I failed to even mention it on my own blog. Today I hosted a country music radio program. But not just any radio program, I was invited to be a temporary part of the Back to the Country team on WORT 89.9 fm. Country music scholar Bill C. Malone, of Country Music USA and Ken Burns's Country Music documentary fame (among other great projects), created this legendary radio show 23 years ago in Madison and has faithfully hosted it every week until his departure from Wisconsin last month. After he and Bobbie went back to the Texas country, a team was created to keep his legendary country music show going. I was asked to be part of that team and host a show every 2nd Wednesday of the month until a permanent host is found.

To that end, I spent three hours today playing my very favorite Country Fuzz 45s and LPs from 9am-12pm. What is Country Fuzz, you ask? It's distorted, loud, fuzzy guitars played in traditional 1960s classic country recordings (ie "Don't Worry" by Marty Robbins, the first ever recording of guitar fuzz). "But I missed the show!" you say. Well, the good news is that the show was archived and will be available via the WORT website (wortfm.org) for the next two weeks. Then it's gone forever. Like, poof! If you want to hear it, just go to the WORT website, click Archives, and then look for the Back to the Country show that aired 8-12-20. And in case you're finding this post more than two weeks off in the future, here's a brief description of what I played and why. It's a good list, even if it lacks my enthusiastic and witty asides in between each tune. 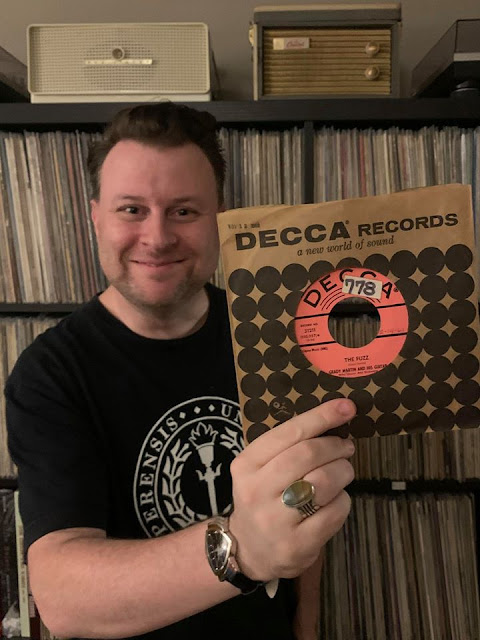 Playlist Title: Back to the Country

Show Description: Country Fuzz w/ Host Nate Gibson: Traditional country music is a bit of an oxymoron, as even within the "tradition" there has been a ton of innovation⎼pedal steel guitars, drums, new picking styles, etc. One of the greatest innovations in traditional country music is the development of the fuzz guitar. The result of a faulty mixing board, Grady Martin recorded the first country fuzz guitar on Marty Robbins' hit tune "Don't Worry" in 1960. A year later he recorded an instrumental with the same effect, "The Fuzz," and the following year engineer Glenn Snoddy sold the sound effect to Gibson Guitar Corp. who made the first mass-produced fuzz guitar pedal. Bands like the Ventures, Davie Allen, the Rolling Stones, Jimi Hendrix, and others made the sound famous, but country musicians held on to the fuzz throughout the '60s and into the early '70s. For more than a decade I've been collecting fuzz country records and today I'll be sharing three hours of the very best from my collection of rare fuzz country 45s and LPs.

Wanda Jackson "This Gun Don't Care" from 5712 on Capitol

Waylon Jennings "Six Strings Away" from 47-9642 on RCA Victor

Charlie Walker ""T" for Texas" from PL-168 on Plantation

The Willis Brothers "Soft Shoulders, Dangerous Curves" from Thunder on the Road on Starday

George Riddle "What Have I Gotta Do" from 755 on Starday

Moon Mullican "Fools Like Me" from Mr. Piano Man on Starday

Curtis Leach "Wheelin' and Dealin'" from LH-568 on Longhorn

Kay Adams "Big Mac" from Wheels and Tears on Tower

Posted by nathandgibson at 12:02 PM No comments: