Hey and howdy friends, I’ve just finished recording a brand new record called Nate Gibson & the Stars of Starday, but I need your help to finish it!

The record is now completely recorded, but I still need some help to finish it. If you Pre-Order the album (CD, 2xLP, or Digital Download) you can get all sorts of cool incentives and limited rewards via a brand new Kickstarter campaign that just launched today! 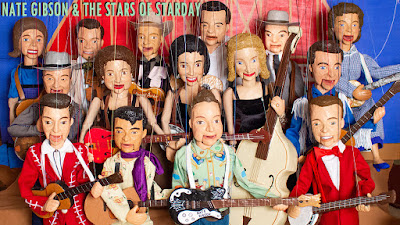 With Kickstarter, it's all or nothing. The project either gets funded or it doesn't, so I greatly appreciate any and all support. But even if you can't contribute to the cause monetarily, just sharing it with your friends would be immensely appreciated. And in case you'd like to watch a goofy video of me in my fancy Union Western Clothing Necco shirt talking about the project and pleading for your help, well that's only on the Kickstarter page.

ABOUT STARDAY & THE PROJECT

Starday Records was the largest independent country music record label in the 1950s and ‘60s, releasing a lot of incredible traditional country music, honky-tonk, rockabilly, bluegrass, gospel, and western swing. As my friends know, I’ve been obsessed with Starday Records for many years; I even wrote a book about the label called The Starday Story: The House That Country Music Built (University Press of Mississippi).

In recent years, I've wanted to shine an even brighter light on the music itself, specifically on the many Starday artists who are still alive and still making great music today. So I decided to travel around the country and make a record with some of my all-time favorite Starday artists. Along the way I picked up some incredible studio musicians including Marty Stuart, Kenny Vaughan, Chris Scruggs, and many more, and together we finished the album!

SO WHAT'S ON THE RECORD?

24 Starday songs recorded as duets with the original Starday artists:

What an amazing group of country music stars!! It’s a really fun record with a lot of traditional country music, bluegrass, rockabilly, western swing, honky-tonk, and gospel music legends from the 1950s and ‘60s! I love that all of these artists are still making great music today, 50-60 years after their Starday records first came out, and I really want to help and support all of them in every way that I can.

BUT I NEED YOUR HELP TO FINISH THE PROJECT!

It will cost thousands of dollars to pay for the licensing fees for 24 songs (which adds up quickly), the pressing of a gatefolded double-album on vinyl, a CD release, and to make a digital release possible.

WHERE WILL YOUR MONEY GO?

Based on estimates I've received from Pirates Press, Discmakers, and the Harry Fox licensing agency, if we raise $10,000, I can do the following:

If we raise $16,000, I can do all of the above as well as create music videos. I've got 24 super-cool Starday marionettes and my plan is make at least 12 music videos (one for each artist or group). The puppets are already completed, but this money will go towards paying for basic video editing help (color correction, cropping, syncing, text and graphics insertion, etc.).

Finally, if we raise, $20,000, well then, I could put that last $4k towards my credit card bill which I haven't been able to pay down since this project began. Boy, wouldn't that be dreamy!?!? I could also use some of that money to pay the costs of shipping 24 marionettes to their real-life likenesses as a Thank You for participating in this project.

WHAT WILL YOU GET OUT OF THIS?

Invest $20 or more and you’ll get to HEAR and/or HOLD the new Nate Gibson & the Stars of Starday album!

If you're a fan of Nate Gibson, Starday Records, traditional country music, or any of the artists involved with this production and you are able to contribute more to the cause, additional perks include:
FINAL THOUGHTS

I’m super excited about this album and I hope you are too. All of the Starday legends sound amazing and I know everyone is going to love it when they hear it. While I’m proud that I’ve been able to self-fund the entire project thus far, my credit can be extended no more! That said, I really don't want to let down the Stars of Starday, and I certainly don't want to deprive their fans of hearing the new record, and so I ask that you consider pre-ordering a copy to help this project see the light of day. Kickstarter campaigns are mighty risky these days, as they are an all or nothing ordeal, but together I am confident that we can meet our goals!
PLEASE HELP SPREAD THE WORD!

All that said, if this project sounds promising and you know someone else who also likes traditional country music, rockabilly, bluegrass, gospel, honky-tonk, or western swing (or is just a huge fan of marionette music videos), please do let them know about this Kickstarter campaign! Every share helps, and I'll keep updating the site with studio session snippets, interview gems, music video productions, and relevant info about the release as often as I'm able!

Kickstarter link: http://kck.st/2OVxC0t
Posted by nathandgibson at 11:34 AM No comments: