Nate Gibson Explores Mercury-Starday Country Series on Back to the Country WORT 89.9FM

Howdy Friends, I'll be back on WORT 89.9FM this Wednesday morning (1/13/21 9:00am-noon CST) with a three-hour Back to the Country show all about the Mercury-Starday Country Series.

Though it only lasted one year, the 1957 merger brought Starday Records to Nashville, brought Margie Singleton and Shelby Singleton into the music business, released the first records by the Big Bopper and Roger Miller, unleashed some blistering rockabilly by Sleepy LaBeef and Curtis Gordon, scored chart hits by George Jones and Jimmie Skinner, and issued some stellar bluegrass by the Stanley Brothers, Bill Clifton, Carl Story, Jim Eanes and more.

In addition to all 52 singles and 5 LPs, I've got some interview snippets, advance acetates, rare live recordings from the era, and even a zany break-in 45 using these tunes. In between the musical interludes I'll regale you with tales of recording sessions, writing the Starday book, collecting the records, and more. I might even sing and dance for ya. Hopefully it'll be a nice break from this week's insanity... streaming at www.wortfm.org and available in the WORT Archive for two weeks after Wednesday morning's broadcast. 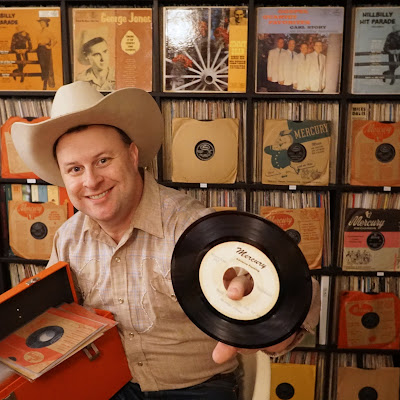 Posted by nathandgibson at 11:26 AM No comments: