So, I recently got into one of those pointless online debates with a mutual friend of my pal Thomas Grant Richardson﻿. Thomas, who works at the Birthplace of Country Music Museum, solicited the advice of his Facebook friends to “help me pick a team for the World Series.” Knowing that he likes country music, I attempted to appeal to his musical taste as a way of winning over a new Royals fan. Despite the obvious food advantage (BBQ is WAY better than Rice-A-Roni!), I suggested that there were easily more country music songs about KC than there were about Frisco. Perhaps I was choosing to be willfully ignorant of the large mass of San Francisco-themed country songs, or perhaps I was just nostalgic for my days growing up in Kansas, but either way it was just one of those unresearched gut-feelings filled with “truthiness” and everything that is right in the world. Thomas's friend disagreed and suggested that I had “far overstate[d]” my assumption.

Well, as I don’t really have time to research all the country music songs that are either about or mention Kansas City, as I think that list would be HUGE, I thought I’d just go ahead and make a lineup of the strongest Kansas City-Themed Country Music Songs that I could find and see if anyone else can make a San Francisco Country Music Song lineup that matches up! Dare ye to take the challenge? I’m sure a good one can be made and I’d love to see a comparison in anticipation of Tuesday’s big Game One!

1. Lead-off tune. The Royals are known for their speed, so this one’s gotta be quick… I’ll go with Merle Travis’ “Kansas City Blues” from his Unissued Radio Shows, 1944-1948 CD. At 1 minute and 40 seconds, this tune is QUICK and to the point!
2. Batting second, I need a free-swinger to get the line-up moving… Bob Wills is about the most swinging thing in country music, so I’ll go with his rockin’ version of “Kansas City” from Bear Family's  Faded Love 1947-1973 box set [CD9]. (Though the swinging duet version by George Jones and Johnny Paycheck gets an honorable mention if a pinch-hitter is needed.)
3. Batting third, if I am to match KC’s lineup, I need a lefty in here to mix it up, so I’ll go with Flatt and Scruggs’ “Kansas City” from their A Boy Named Sue album. (In this case, “lefty” being a not-so-subtle reference to Earl Scruggs’ left-leaning politics.)
4. Batting clean-up I need a heavy hitter, and Buck Owens had a #2 Billboard smash hit with his “The Kansas City Song” on Capitol 2783.
5. And of course, every good line-up has to have a big hitter backing up the clean-up spot, so I’ll go with Roger Miller’s 1965 Top 10 hit “Kansas City Star” on Smash 1998.
6. For the 6-spot, I’ll go back to the mid-80s, the last time KC was relevant in either the baseball or country music charts, with Steve Wariner’s #15 hit “Kansas City Lights.”
7. But of course, this year’s Royals team is defined by its youth, so for the seventh spot I’ll pencil in Crazy Joe﻿ and his Mad River Outlaws. Crazy Joe was just 28 years old when he released “Kansas City Baby” on his The King of Nerd-A-Billy album, coincidentally the same age as the average of all players on the Royals’ 40-man roster. (http://www.cbssports.com/mlb/teams/roster/KC/kansas-city-royals, accessed 10-21-14)
8. At the bottom of the order there’s generally more speed, so I’ll follow Crazy Joe with the excellent speedy (read: up-tempo), swinging “Kansas City Kitty,” by Dave Stuckey﻿ and the Rhythm Gang, from their Get A Load of This CD.
9. And because the Royals have been eeking out their 1-run victories thanks to their speedy base-running, I’ll go with another speedster in the 9-hole: One of the fastest pickers in all of country music, Mr. Joe Maphis and his “Kansas City Shuffle” from his Starday LP King of the Strings.

Now that there’s a speedy, young country music lineup with some heavy-hitters thrown in for good measure. Here's hoping someone is up to the challenge of making a lineup to face-off against it. I know there are indeed a lot of good country San Francisco songs. I checked iTunes and there are roughly 120 “San Francisco” or “Frisco” songs in the country-related genres (compared to roughly 150 “Kansas City” songs in similar genres), so to all of my San Francisco fan/country music-loving friends, I’d love to see how your Lineup of Frisco-Themed Country Music Songs compares #1-9!
Posted by nathandgibson at 10:00 PM No comments:

Howdy internet... I just posted some higher res versions of the first 100 Starday album covers ever made over on my The Starday Story: The House That Country Music Built page. Feel free to check 'em out if you're into that sort of thing. And while you're there, please feel free to give the ol' Starday book page a 'like' if you're so inclined. It's just a wee shy of 1,000 likes milestone at the moment and I'm trying to keep it up to date with new posts once a week or so. Thanks for your continued support! - Ndg 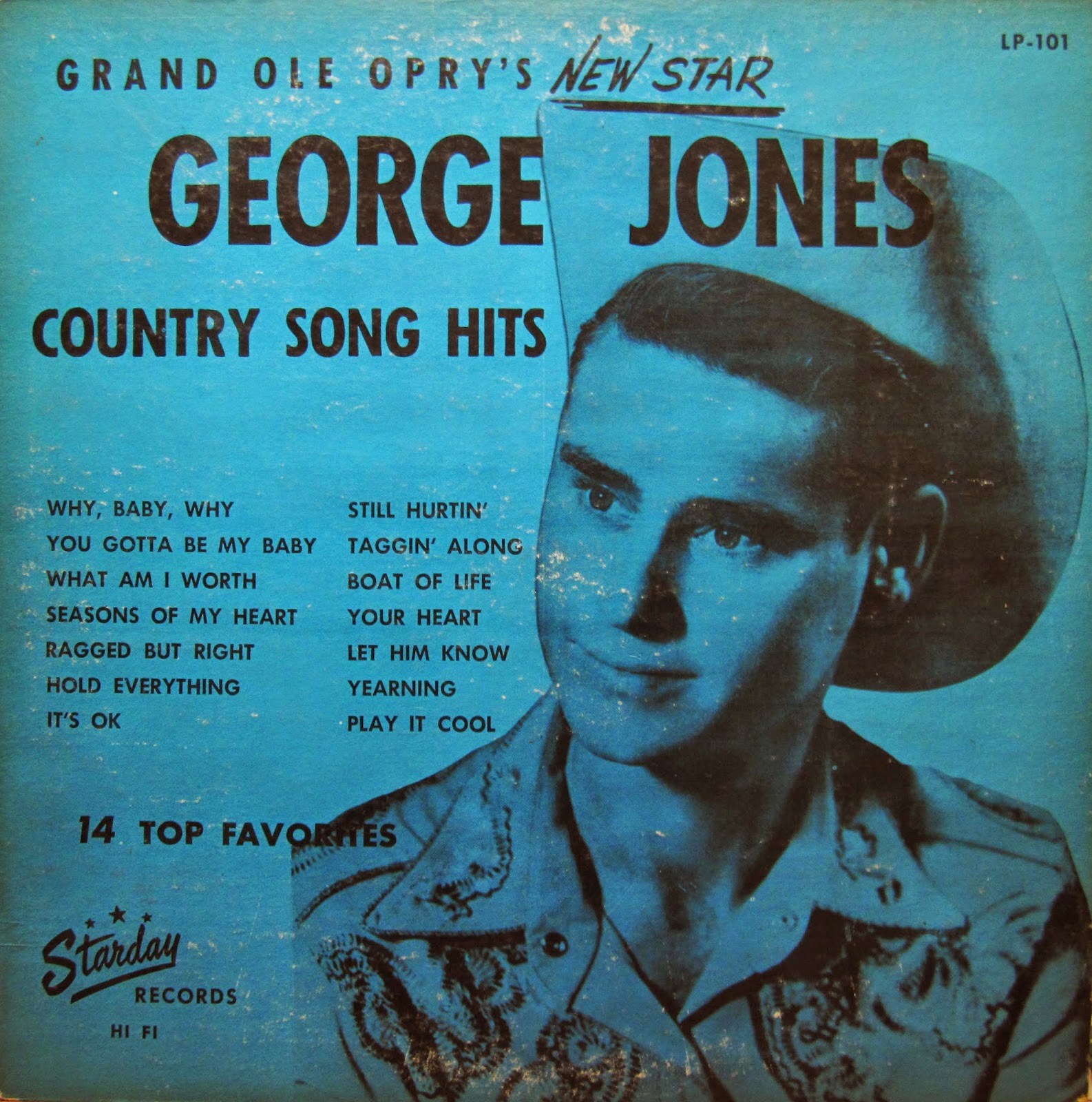 SLP 101 - George Jones
Posted by nathandgibson at 8:36 PM No comments: