Happy Martin Luther King, Jr. Day to everyone. I thought this might be a good day to share with everyone "He Went to the Mountain Top," an extremely rare Starday tribute to MLK by famed WLAC disc jockey Bill "Hoss" Allen. Allen, widely known in the '60s for creating and hosting the legendary The !!!! Beat TV show (one of my favorite shows!!) and DJing at the highest wattage clear channel R&B radio station (WLAC, Nashville), recorded this tribute to Martin Luther King, Jr. at the Starday Sound Studios in Nashville, TN. Most of the releases of this record were white-label promos with the flipside Earl Gaines track released on both sides. After looking for it for nearly 10 years, I finally tracked down a copy with the Allen track on the flip and just today uploaded it to YouTube.

Recorded in early '68, shortly after King's assassination in April of that year, by Hoss Allen with Billy Cox on bass and possibly Skippy Brooks or Ray Valentine on piano and/or organ. 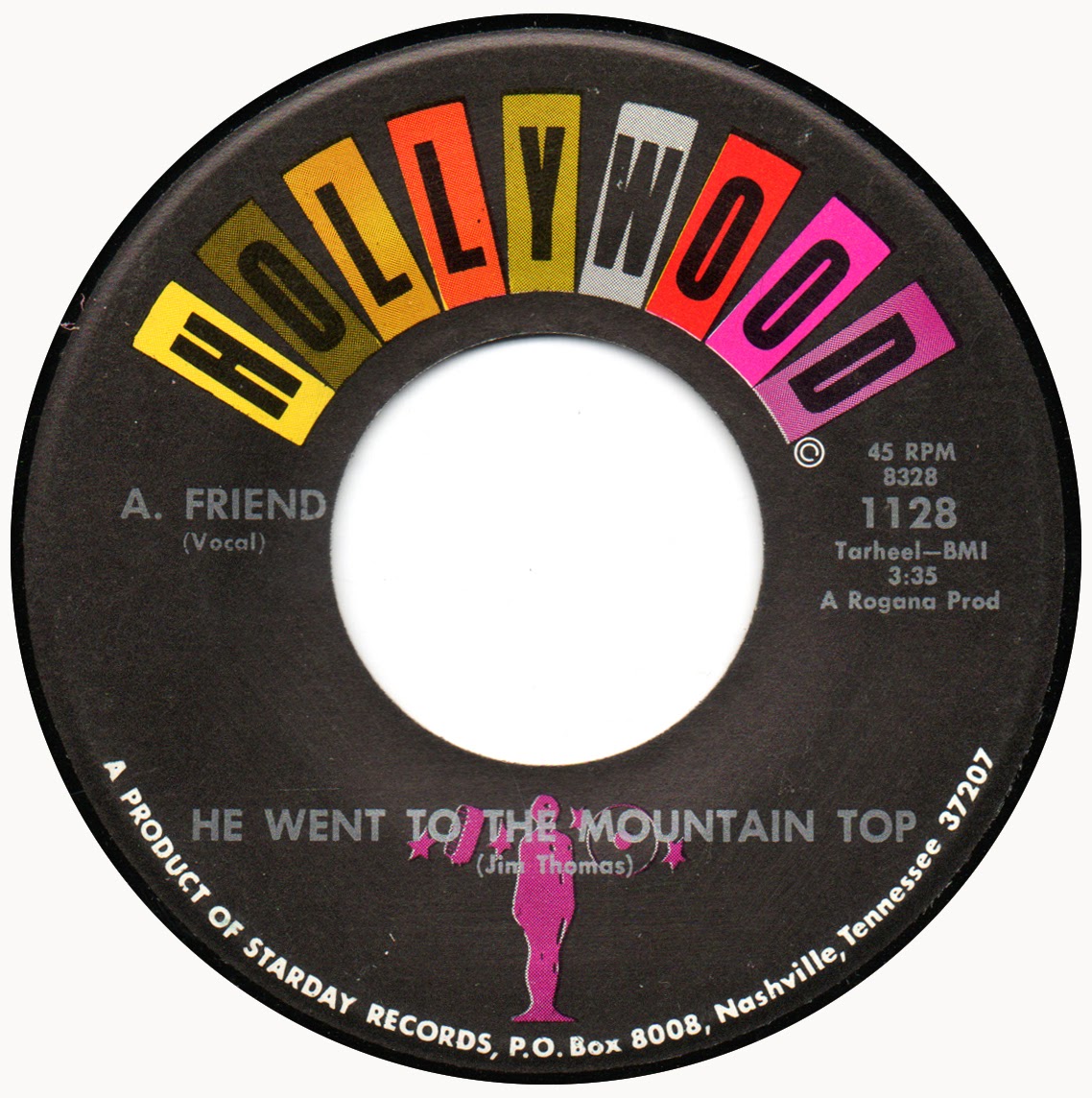 During the mid to late '60s Allen was recording and producing R&B, blues, and soul sessions at the Starday Sound Studio nearly every weekend, as well as renting out office space at the Starday offices for his Rogana production company. The Allen-produced recordings were made at the Starday Studios (as well as a few others) and then leased to a slew of other independent labels including Excello, Copa, Bragg, Rich, Hit Sound, Chess, Sound Stage 7, and later Allen's own Hermitage label to name just a few. Allen's presence around the Starday offices even convinced Don Pierce to revive his Hollywood R&B label. 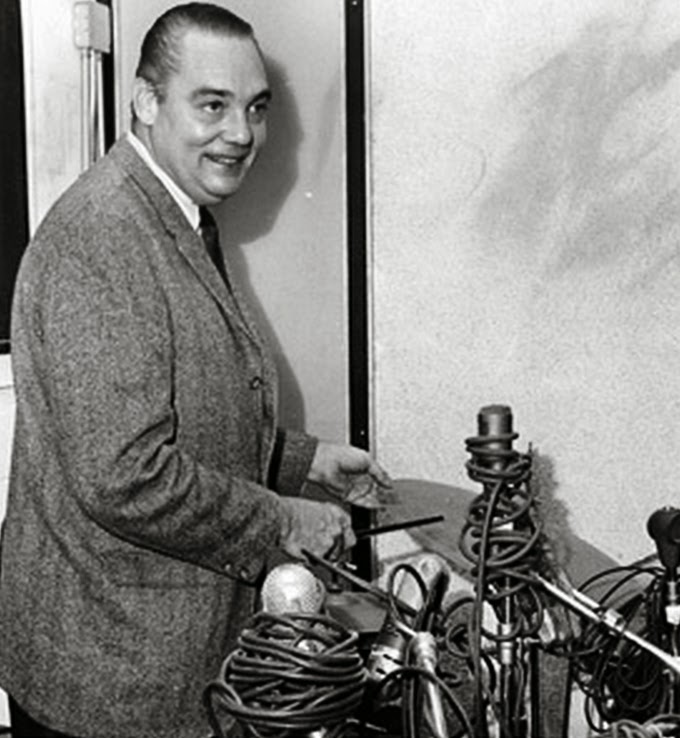 Just prior to his involvement with Starday, Pierce bought the Hollywood label from R&B mogul John Dolphin in L.A. (for more on this, check out Chapter One in the Starday Story). Though Pierce wasn't really personally invested in the label (he just funded it), the early R&B hits on this label helped to keep Starday afloat during the very early years ('53-54). John Dolphin continued to produce most of the Hollywood recording sessions until he was murdered in 1958. As a side note, I remember Don telling me how shook up he was about this because a.) John was his friend and b.) it was just a year or so after he had moved to Nashville from L.A. and he had given his old office space, desk, and chair to John Dolphin and it was while he was sitting at in Don's old office and at his old desk that John was murdered by Percy Ivy, a songwriter upset by the lack of royalties he had received. 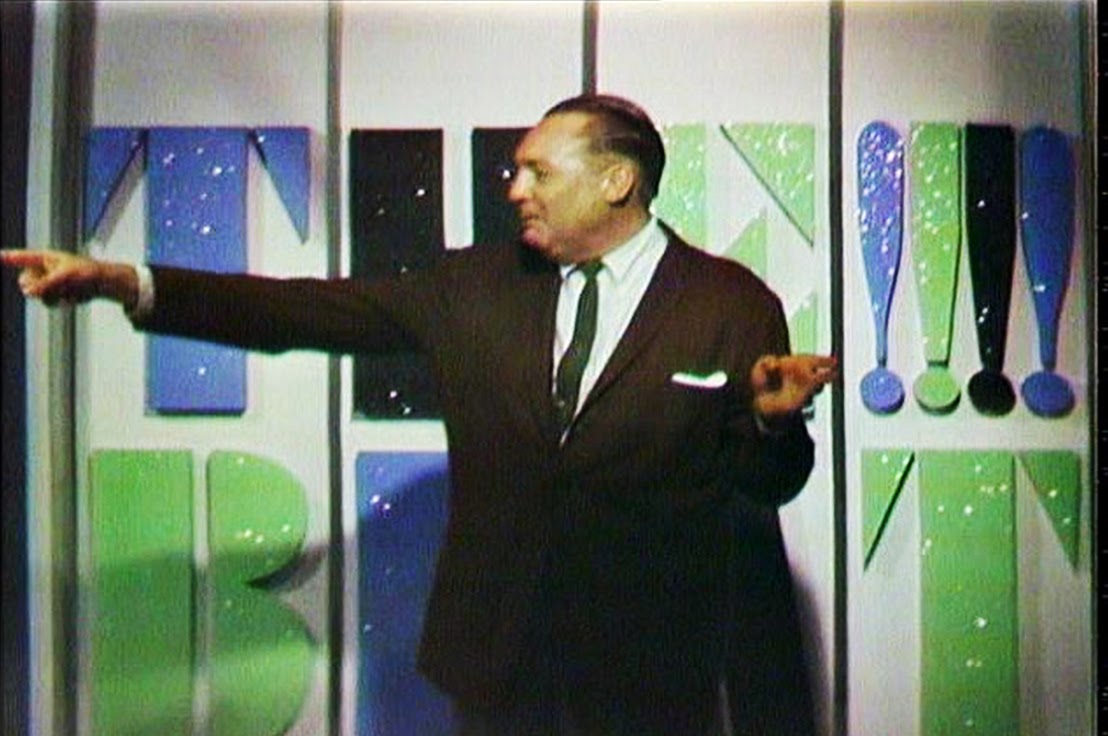 After 1958, the Hollywood label became mostly dormant. It wasn't until the mid '60s, when Allen began renting office space in the Starday offices, that Pierce decided to revive the label and with a new look (the rainbow logo). Twenty-four outstanding soul and blues singles were released on the Hollywood label before Pierce merged his Starday label with the King label and sold them as a package deal. This particular MLK tribute, like many of the Rogana productions, was released on the new-look Hollywood label, which clearly stated at the bottom of the label that it was a product of Starday Records. The flip side was another tribute to MLK, 'Our Friend Is Gone,' written by Allen and performed by Allen's close friend and R&B legend Earl Gaines. Allen's vocal side, a rarity in his long career in the music business, was written by Jim Thomas and credited to "A. Friend" for the release. 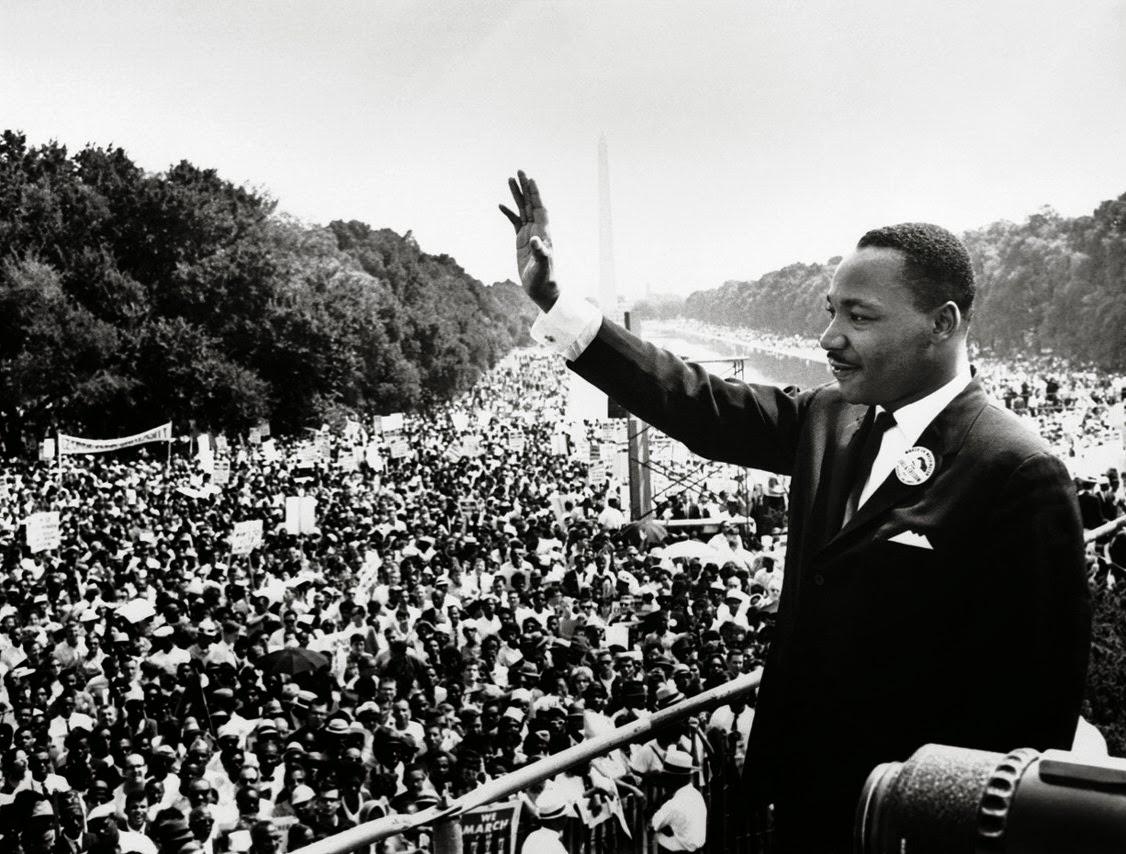 Posted by nathandgibson at 5:26 PM No comments:

On my drive home today I decided to stop by and visit the Kanesville Used Records shop in Council Bluffs, IA. I've been told by dozens of people over the years to go and check this place out and, lo and behold, it did not disappoint! If anybody is within driving distance of Omaha/Council Bluffs, I highly recommend this record heaven and can't wait to go back. Right when I walked in I met with the owner, Tim Behrens, who was proudly wearing his snazzy Starday western shirt. I knew right then that it was going to be a good place. Then he offered me some home baked pumpkin bread. That's when I knew it was going to be a great place. 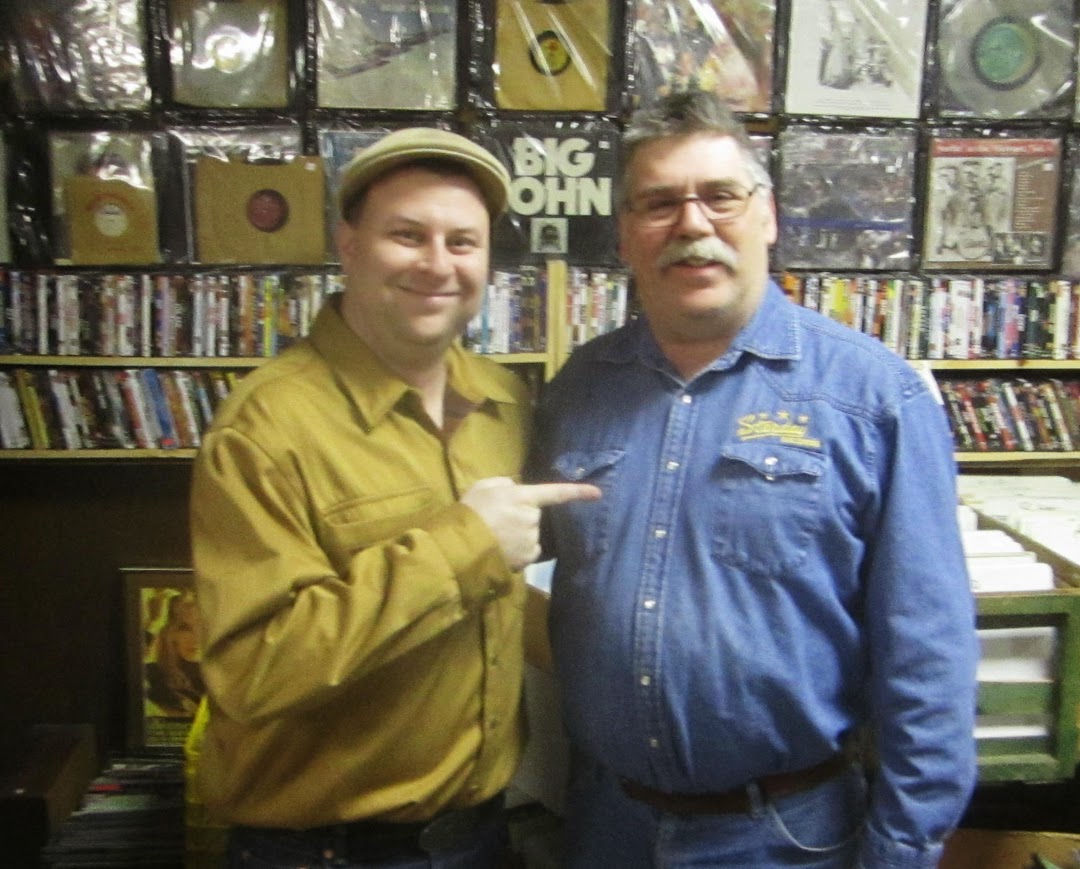 Though I could only stay for a short time (I never even had a chance to see the second floor or the basement-- one could literally spend weeks here and not see it all), I did manage to find, scattered among the million plus items in stock, several incredible and cheap records including one rare Starday 45 I had never seen before. 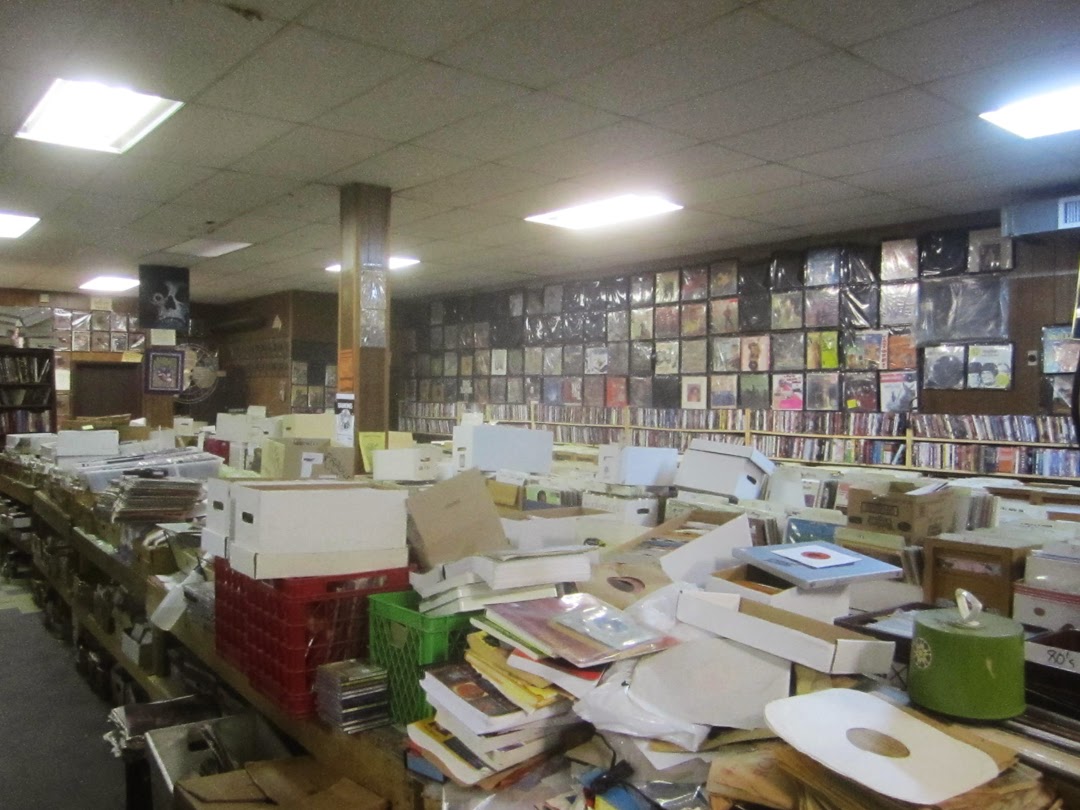 Ohio-born Larry Edwards recorded two 45s for the Nashville subsidiary label in 1965 before seeing his 3rd Tommy Hill-produced single released on the Starday main label in 1966 (and included on a few Starday compilation LPs as well). I've had the other two 45s for years but could never seem to track down his elusive "Making the Rounds" disc, which was my favorite of the three. Fortunately for me, I found it buried in one of the first stacks I picked up at Kanesville-- and it was only $0.80! Great tune, great price, great find! 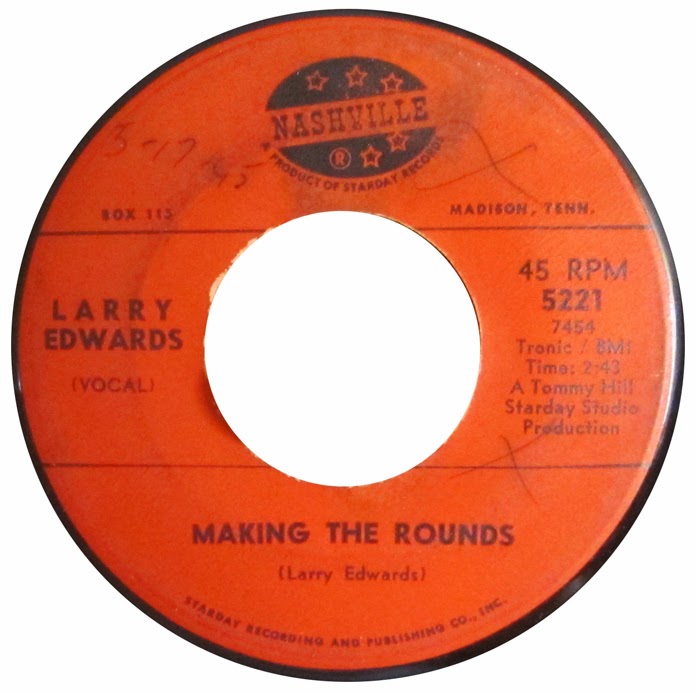 Check it out here: http://www.youtube.com/watch?v=LAkyV1IsA1k

Whilst trying to find out a little more about Larry online, I discovered that he has two albums up on CD Universe (http://www.cduniverse.com/search/xx/music/artist/Larry+Edwards/a/albums.htm). The Greatest Hits album includes all six of his original Starday sides and he even wrote his own artist bio to go with them. For those of you interested in Larry's music and story, I'll leave it up to him to tell the rest of the story:

"Born March 26, 1931. Parents William and Minnie (Bernice) Edwards. Birthplace - Delaware, Ohio. Moved to Marion, Ohio at age of four. Started singing at four and a half. First song - "Old Shep" - sang at school functions and family gatherings. I learned to play guitar in my teens. My first professional job was in a bar, at age fifteen, which meant one of my parents had to be with me at all times. Joined U.S. Navy in 1951- spent four years as a Naval Aviation Metalsmith, attaining the rank of Second Class Petty Officer in November, 1955, shortly before leaving the service. After returning to Marion, I formed a band, "The Dude Ranch Boys" which consisted of my brother Chilly, who played steel guitar, and a distant cousin, Jack Kerwood, who played fiddle. A few months later we added bass to our group, played by my older brother, Foryst, who used the name "Rosebud" on stage. We played for various amateur shows, radio gigs for the fair, and at dances. In the spring of 1959, I took a tape of one of our performances to an audition for the Ohio Jamboree, which had recently started under the management of Clay Eager. He was a former member of the Midwestern Hayride, and then a D.J. on WMNI Radio in Columbus, Ohio. We became regulars on the show. I cut my first record soon after, a song called "World of Make Believe" (included in my 2007 Album "Greatest Hits"). We then moved to a similar show in Marion, Ohio called the Marion County Jamboree. Through the 1960's I made several more records for various labels. I recorded eight songs in 1964 and 1966, two of which were released, under Starday Record label. The songs were "Over the Wall" and "The Thirteenth Month of Next Year", the latter song I wrote hit national charts. Some of the others became hits in different local spots throughout Ohio, West Virginia, Indiana, Kentucky, and Michigan. In 1974, due to the ill health of my daughter, we moved to Phoenix. i was out of the music business for a few years but returned as a bass player and band leader. My band has had various names throughout the years, mostly back east as The Dude Ranch Boys and locally in Phoenix as "The Country Tradition". In 1978 I returned to recording doing, "Twice the Woman You Are", b/w "I Can't Stop Crying Long Enough to Laugh" for a Nashville Recording Studio, under the name of Rocky Roads. In 1986 I returned to Columbus, Ohio for a four song recording session at Rome records. These were the last recordings until the fall of 2007 when I cut a 24 song album, 12 old songs - 12 new. Nineteen songs were written by me, one by my brother Chilly, "I Walk the Streets In Darkness". Chilly had retired from the music profession, but came out of retirement to do the excellent steel guitar work on my new album. I am the father of four fine daughters; Eileen, Elaine, Annette, Arlene, and two sons, Roger and Rick, all of whom I am extremely proud. Unfortunately, I lost Rick due to an accident and Annette of cancer. The others are all happily married and I am a proud grandpa and great grandpa. The love of my life is Louise (Lou) Myers, also my Business Manager." 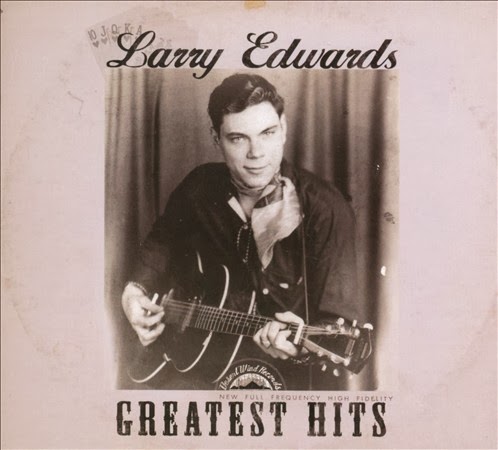