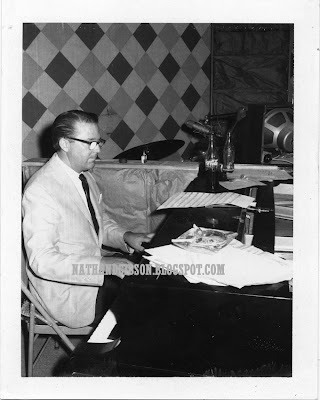 Photo of Vic Willis at the piano in the Starday Sound Studios, circa 1964. Photo from Don Pierce collection.

This here's a post to honor the great John "Vic" Willis, one-third of the Willis Brothers/Oklahoma Wranglers/Drifting Cowboys, who passed away on this day in 1995. The Willis Brothers were a Starday institution: They recorded over 150 tunes of their own for Starday (lots of great cowboy and trucker fare), appeared on many more sessions (see the post below by Don Lewis among many others), were major players in the Starday jingle company (ran by Vic alongside Don Pierce, Little Roy Wiggins, Eddy Arnold, and Charles Mosley) and all of their wives worked in the Starday office. This here's a funny clip from their appearance in the Ron Ormond film, Forty Acre Feud (one of the many Ormond Nashville-era films starring country music stars, financially backed by Don Pierce). Such cool footage, even if it is obviously lipsynched... Enjoy!

Posted by nathandgibson at 7:51 AM