Observing the Stars of Starday Veterans

As we observe Veterans Day this year, I thought it would be appropriate to acknowledge four of the Stars of Starday and thank them for their service to our country: Frankie Miller, Jesse McReynolds, Bill Clifton, and Wade Jackson.

Frankie Miller and Jesse McReynolds served the U.S. Army in Korea between 1952-1954. Both Frankie and Jesse were already recording stars by the time they entered the war, Frankie with 4-Star/Gilt-Edge and Jesse with Kentucky Records, and each continued making music during their time in Korea. Jesse formed a band with Charlie Louvin called the Dusty Roads Boys and entertained the troops, while Frankie entertained his fellow soldiers with his guitar as a forward observer for a Howitzer cannon field battalion, eventually earning a Bronze Star Medal for heroic effort in a combat zone. Frankie remembers, “I had a guitar with me everywhere I went over there. I probably went through four or five guitars because they had a rainy season and man, the glue would just come apart. One day you’d grab the handle of the guitar and it’d be in your hand.” Both Frankie and Jesse scored major label contracts upon their return from Korea and each of them also joined the Starday ranks in 1958.

Bill Clifton joined the U.S. Marine ROTC while a student at the University of Virginia in 1950 and his guitar playing helped him make a few important friends in an otherwise hostile basic training environment. He joined the Marines in the Winter of 1954 and spent much of his time in North Carolina and two summer stints in Puerto Rico, eventually earning the rank of First Lieutenant. He completed his service as a commanding officer of a platoon in the Second Marine Division in June 1956 and began recording for Starday Records shortly thereafter.

Wade Jackson, a 20-year U.S. military veteran, also spent time in Korea around the same time as Frankie and Jesse (preceded and followed by longer stints in Germany). Initially with the U.S. Army under the command of his older brother Marvin Jackson (his younger brother Stonewall Jackson went into the Navy), Wade was injured twice in combat in Korea but remembers that, “I went to the hospital and they got most of [the metal] out.” He told me that, “While during the War in Korea, our company was being held in reserve and a special services show of all GI talent came through to entertain us. They borrowed me, literally out of the foxhole, to continue the rest of their entertainment stops with them. I felt so honored and privileged that my eyes still get a little damp when I think about it.” After the Korean War ended, Wade joined the Air Force and continued entertaining troops around the world as frontman of The String Kings and later The Drifters. He retired as a Sergeant and returned to the U.S. in 1966 and began recording for Starday Records later that same year.

To all four of these great artists, thank you for your dedicated service to our country! And as musicians, thank you for your incredible music throughout the last 60+ years. I am a huge fan of all four of these artists and it is the honor of my life to get to record with them on the new Nate Gibson & the Stars of Starday project. If you’d like to hear our new record, please support our Kickstarter which has less than 2 weeks till close! http://kck.st/2OVxC0t Many thanks! 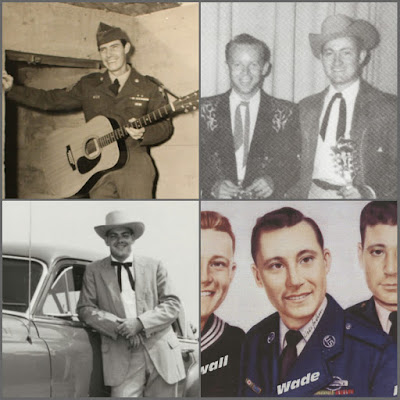 Posted by nathandgibson at 10:29 AM