It is with great sadness that I report that we’ve lost another Starday legend. My friend Rudy "Tutti" Grayzell passed away last week after a day of romping around with family and chasing his granddaughter around the house. Rudy recorded for several influential record labels in the ‘50s and ‘60s such as Abbott, Capitol, Sun, Award, and Dexter, but it was his Starday recordings that he loved the most and that earned him a touring spot with Elvis Presley for a year and a half in the mid-50s.

Growing up in San Antonio, he frequently performed alongside Johnny Cash, Charlie Walker, Roy Orbison, Link Davis, Doug Sahm, and many others and he made his first recordings for Abbott Records with Jim Reeves’ band in 1953. He was randomly seated next to Starday president Don Pierce on a flight to Texas in 1956 and was immediately offered a contract with Starday Records. He went on to have one of the most storied careers in show business and was one of the leading lights of the European rockabilly revival (and eventually became a Rockabilly Hall of Famer). After a spell in Vegas, Rudy moved to Portland, OR and kept active in music, theater, and film in the Pacific Northwest, as well as becoming the national spokesman for Pine Bros. cough drops.

I first met Rudy in August of 2005 when I was working on The Starday Story and his stories about the early Texas honky-tonk and rockabilly days were both hilarious and wild. We kept in contact throughout the project and when the book finally came out, Rudy became one of its biggest promoters. Later, I recorded a tribute to Starday Records for Pete Hakonen’s Goofin’ label and included a cover of Rudy’s Starday tune ‘Jig-Ga-Lee-Ga.’ Rudy loved it and offered to write the liner notes for the record and they were perfect. In 2013, Carlos Diaz invited both of us to Spain to perform at his Screamin’ Festival and I consider it among my life’s highlights to sing ‘Jig-Ga-Lee-Ga’ with Rudy on his 80th birthday in Calella (many thanks also to Chris Wilkinson, Lynette and Phil Morgan, Willy Briggs, and the amazing Tennessee Rhythm Riders band!).

When I began working on the Stars of Starday project in May of 2017, Rudy was among the first artists I talked to about it and he enthusiastically accepted my invitation. We recorded two tracks together, ‘Let’s Get Wild’ and ‘Duck Tail,’ and I think our banter at the end of each song shows how much we loved being around each other (and, of course, many thanks to Jerry Miller, Tim Moore, and Carl Sonny Leyland for backing us!). Rudy was hilarious as always and I can’t thank Roy Kay and Ramona Cachinero enough for making the recordings and taking the photos! I think listening to those recordings (with many thanks to Nico and Bear Family Records for making them available!) gives you a pretty good idea of Rudy’s high energy, but he was also among my kindest and most thoughtful friends. I kept all of his voicemails from the past year or so because repeated listenings always cheered me up. I won’t share the main content of them of course, but for those who loved Rudy, you might enjoy hearing his laugh, which was how he began nearly every phone call or message. And every time Rudy called me he also had an idea for some kind of project we could do together. He was always creative, always positive, always inspiring, always lifting me up, and always laughing along the way. The guy was just downright funny and a tornado of positivity. I’ll really miss ya, Rudy, but I'm grateful for the times we had. Rest in peace, and in your own words, may the good Lord take a likin’ to ya!

Posted by nathandgibson at 12:55 PM No comments:

Nate Gibson & the Stars of Starday finally available on CD, 2xLP, and Cassette!

Hooray! The Nate Gibson & the Stars of Starday Kickstarter rewards have all been fulfilled and the double album is at last available to the public via CD [by Bear Family Records w/ 56-page booklet and bonus track], cassette [yellow/black Starday-inspired shell], or vinyl [Deluxe 2xLP in red or black vinyl with digital download card]. Perhaps you already own it but you want a backup preservation copy. Perhaps you want to own it on every available format. Or maybe you know someone who would like it as a gift [and who wouldn't?!]. Either way, anyone can now purchase the album on any format via Discogs:
https://www.discogs.com/Nate-Gibson-Nate-Gibson-the-Stars-of-Starday/master/1563032 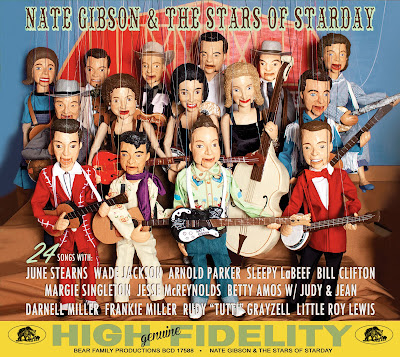 And if you buy one of the few remaining red vinyl 2xLP versions, I'll send ya an autographed 8x10 of a Starday Star too!

To celebrate the arrival and availability of the LP, I'm also releasing the third music video from the record: Betty Amos w/ Judy & Jean & Nate Gibson singing 'Eighteen Wheels A Rolling.' Betty Amos was just the second woman ever recorded playing Scruggs-style banjo when this was originally recorded for Starday Records back in '64. Fortunately, the trio is still together and sounding great and it was such a thrill to get to sing this legendary truck-drivin' classic with them. With many thanks to Kenny Vaughan, Chris Scruggs, Dave Roe, and Pete Finney for making it sound great! 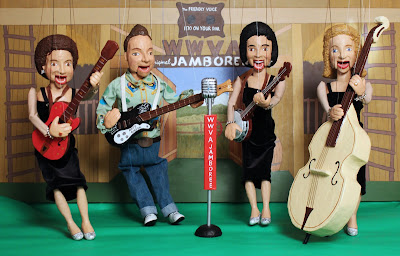 The Nate Gibson & the Stars of Starday Bear Family CDs have ARRIVED!

Woo-Hoo! The Nate Gibson & the Stars of Starday CD from Bear Family is REAL and BEAUTIFUL and IN-HAND! 25 tracks. A 56-page booklet. Many photos. Lots of stories. In shrink! Honky-Tonk. Bluegrass. Rockabilly. Gospel. Western Swing. And in-between! For those who pre-ordered the CD via Kickstarter, I'll be fulfilling those rewards this weekend (unless you also pre-ordered the Double LP, in which case your CD will ship when the LPs arrive). If you are a Starday artist or my mom, I sent your CDs out yesterday! For anyone in the U.S. who didn't pre-order a copy but wants in on the fun now that you see how rad it looks, shoot me a message! I have a small stack of copies available for sale ($20+postage and it's yours!). If you're in Europe, I'd recommend buying it directly from Bear Family Records or at your favourite local music shoppe to save on shipping! 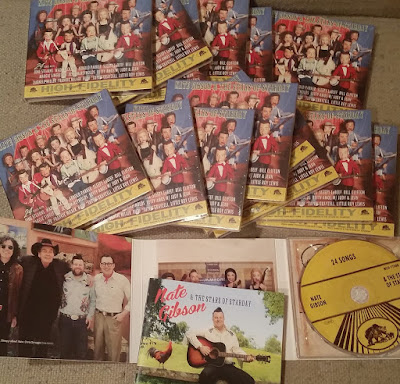 It has been a while since I made my last Nate Gibson & the Stars of Starday update, as I was hoping to wait until everything was in production before posting again, but alas... I've got big news!!
Once the project was funded, I began calling around to CD manufacturing places all over the country, looking for someone who would be willing to print a 50+ page CD booklet. After all, I have lots of stories and photos to share. Alas, I couldn't find anybody who would print anything over 20 panels for a CD. So, I wrote to a friend of mine who works for Bear Family Records in Germany. I asked him who their printer was because every one of their products looks amazing! But rather than provide me with their printing sources, to my surprise, he asked me if Bear Family could release the CD. Whoa! And huzzah! And yes!
In my opinion, there is no finer musical product in the world than a Bear Family Records CD or Box and I'm excited to announce that Nate Gibson & the Stars of Starday will be released on CD by Bear with a full-color 56-page booklet. Huzzah! It is going to look and sound great! And not only does this mean that I can provide a better looking and better sounding package to those who selected a CD for their Kickstarter reward, it also means better world-wide distribution. And what's more, it means that I will be able to fulfill ALL of the Kickstarter flex goals!! With the money saved on CD production, I'm able to produce a fancier version of the double LP on colored vinyl with full-color inserts and also fund the editing of 12 separate music videos!!
I'm over the moon about all of this. For those of you who ordered a rewards package with a Nate Gibson & the Stars of Starday CD, I feel like you just hit the jackpot. You will love it! For those of you who ordered a rewards package with the Nate Gibson & the Stars of Starday LP, you just got a serious upgrade. And for those of you who selected a rewards package that did not include a Nate Gibson & the Stars of CD, but you really want one now that you know how amazing it will be, Bear Family is officially taking pre-orders: https://www.bear-family.com/various-artists-nate-gibson-and-the-stars-of-starday-cd.html
By clicking on that link above you'll be able to see the CD cover art and even sample 30 seconds from each track. But again, if your Kickstarter rewards package already includes a Nate Gibson & the Stars of Starday CD, you'll get this CD once it is ready!
OK. That's all for now. The Nate Gibson & the Stars of Starday custom Zippo lighter and birth certificate have been made. Custom marionettes have been ordered and shipped. Stars of Starday baseball cards by Topps have been printed. Lots of rewards are in stock and ready to ship. The artwork is near complete. The liner notes are near complete. I am targeting mid-April for a release date, but I will keep everyone updated once I get an official release date from the CD and LP pressing plants.
Cheers and many thanks again for supporting Nate Gibson & the Stars of Starday. 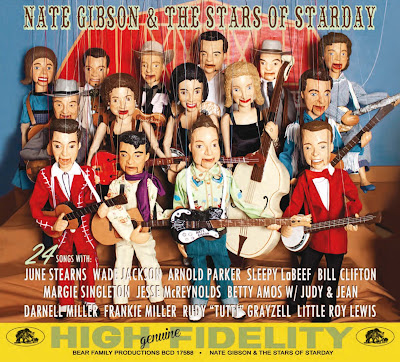 Posted by nathandgibson at 11:07 AM No comments: